“Stopping By Woods On a Snowy Evening,
Robert Frost, 1923

Robert Frost, one of America’s most important and well-loved poets, called Vermont his home (at least during the summer and fall) for over 40 years.  When I picture Vermont (which has not been all that often, to be honest), it is hard for me not to see the Vermont that Frost described in his poetry, including the verse above from one of his most well-known poems.

I don’t have very many ancestors in Bennington County, but I have discovered that they played an important role in the formation of that frontier territory.  Here’s a pedigree chart that shows the individuals I’ll be talking about a little later in this essay:

The origins of the state of Vermont go back to the days of early French exploration of North America.  In 1535, during his second voyage in New France (Canada), the French explorer Jacques Cartier discovered the mouth of Richelieu River (which connects to Lake Champlain on the border between Vermont and New York,).  In 1603, Samuel de Champlain and his team again reached the mouth of the river.  Champlain returned to the river in 1608 and again in 1609, exploring upriver through Lake Champlain to modern-day Albany, New York.

A glance at a topographical map reveals why Vermont would have been settled by France earlier than by England.  The Connecticut River, which forms the border between New Hampshire and Vermont, was an early route of exploration from the Connecticut and Massachusetts Colonies. This route, however, did not open up exploration to the western part of Vermont.  Mountain barriers made this travel difficult, and the ease of access for the French through the relatively flat plains south of Quebec City, including a route using the Richelieu River, made Vermont a practical area for the French to explore.  The name of the state – Vermont –derives from the French words “mont verde,” or green mountain.  The mountains of Vermont would have looked green when viewed from the flat plains to the north.

Between 1700 and 1763, England and France fought many times over dominance in the world; this included skirmishes between the two colonial powers in North America.  The most significant of these skirmishes evolved into the French and Indian War (known in other parts of the world as the Seven Years War). After being defeated in 1763 in the Seven Years’ War, France ceded its territory east of the Mississippi River to Great Britain.  At this time, the population of Vermont was about 2,000 people.  Although outright ownership of Vermont was not settled at this time, it was being settled by people from both the British and French colonies.

In the first years of the settlement of Vermont, control over land was held by Massachusetts.  After 1740, however, control fell to New Hampshire.  Beginning with grants of land to the new town of Bennington in 1749, control over this land was given to New Hampshire.  At the same time, however, Governor Clinton of New York claimed land from New York east to the Connecticut – which means that no one agreed about who controlled Vermont.  At this point, the land that came to be called Vermont was know as the New Hampshire grants.

Throughout the 1760s this dispute over land ownership continued.  In 1667, a group called the Green Mountain Boys formed to protect the claimants to the New Hampshire grants from the encroachments of the government of New York. New York had sold land grants to settlers in the region, but these grants conflicted with earlier grants from New Hampshire. The Green Mountain Boys, a local militia, protected the interests of the established New Hampshire land grant settlers against the newly arrived settlers with land titles granted by New York.

The Green Mountain Boys were led by Ethan Allen and Seth Warner, both of whom would achieve later renown during the American Revolution.  Another leader, Remember Baker, was known to be of impetuous character, and led violent reprisals against New York interlopers.  In 1774, a group of Green Mountain Boys called the “Bennington Mob,” under the leadership of Allen and Warner, undertook lawless methods to combat the New Yorkers.  Parallel to these activities, the movement throughout the colonies toward rebellion and independence cast the Green Mountain Boys on the side of the rebels and the New Yorkers on the side of England.

All along, the population of Vermont was growing; by the outbreak of the revolution, 20,000 people lived in Vermont.

In 1777, a group of settlers with New Hampshire land grant titles established the Vermont Republic during the American Revolutionary War. One important battle of the American Revolution – the Battle of Bennington (August 16, 1777) – led to a rematch at Saratoga, New York, in October of the same year, where the British were defeated.  Bennington and Saratoga are recognized as turning points in the Revolutionary War because they were the first major defeats of a British army.

Evolution of the counties in Vermont

The evolution of country boundaries in Vermont is impacted by the controversy between Massachusetts, New Hampshire, and New York over the land that eventually made up the state.  The following maps  are all from the Map of Us website https://www.mapofus.org/vermont/). Bennington County (in the southwest corner of Vermont, bordered on the south by Massachusetts and on the west by New York) was one of the two original counties of the state.  Over the next 25 years, the other counties of Vermont were formed and Bennington County shrank; originally encompassing the entire western half of the state, it achieved its current shape and size by the time of statehood in 1791.  There has been minimal change in the counties of Vermont since that time. 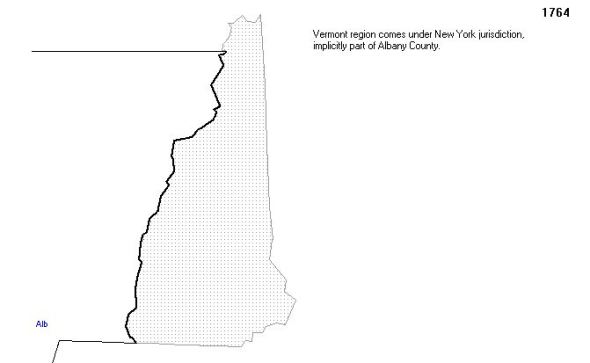 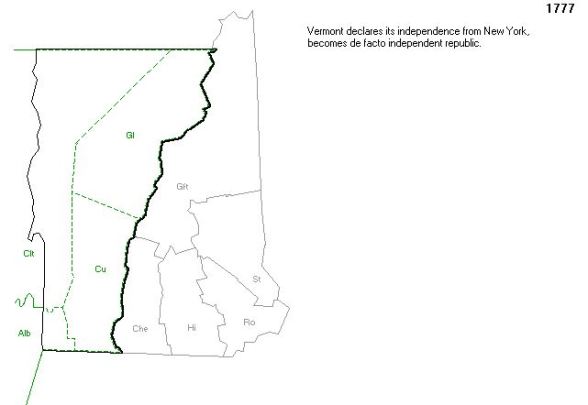 My Ancestors in Bennington County

Although I have organized these location essays alphabetically (by county name), this organization is actually functional in the case of Bennington County; my earliest Vermont ancestor is Josiah Perry, who was descended from the Perry family that I wrote about in the Barnstable, Massachusetts, essay.

Let me fill in the gap.  When I left the Perry family behind, I identified Benjamin Perry (1669-1740) as the first of his family to leave Barnstable.  Benjamin moved with his sons Joshua, Benjamin, Nathaniel, and Eliakim from Sandwich to Stoughton sometime before 1735. For those of you keeping score, Joshua Perry (1709-1784) is my 7th great-grandfather.  In 1740, Joshua purchased from his brothers Eliakim and Nathaniel their shares of the 386-acre lot the three brothers had purchased from their father in 1735. That same year, Joshua married Mary Kingsley (1719-1784) in Stoughton. Shortly thereafter they moved again — to Easton, Massachusetts, in 1747 and to Norwich, Connecticut, before 1752.  They had six children, including my 6th great-grandfather Philip Henry Perry (1743-1775)  before the family moved to Shaftsbury, Bennington County, Vermont by 1775. I’m not sure when the family moved to Shaftsbury.  Philip had married Lydia House (1750-1800) in Connecticut in 1769; their first two children were born in Connecticut in 1770 and 1772, but their last child was born in Vermont four months after Philip died in 1775.

Yes, Philip died as quite a young man – in 1775 he was only 32 years old.  His death is part of the larger story I told before, about the Green Mountain Boys.  Philip joined this militia group sometime in 1775, and died on August 1 of that year in an encounter with a Tory spy, Hazard Wilcox, in Bennington County.  This was a particularly tragic event; Philip and Hazard were apparently neighbors and friends, and they were also probably distant cousins.  The names are too significant – a couple of decades later the War of 1812 military hero – Oliver Hazard Perry – would prevail over the British in the Battle of Lake Erie.  He bears the names Hazard and Perry, reflecting a marriage between these two families some generations back.  I haven’t been able to clarify that relationship yet, but I know it’s there.

There is yet more to this story.  Sometime around 1910 another descendant of Philip and Lydia – William C. Brown – presided over the creation of a plaque to be placed in the train station in Arlington, Vermont (north of Shaftsbury in Bennington County).  William’s family had moved west from Vermont in the 19th century; he was born in Iowa, and came back to Vermont only when he became a railroad executive with authority over the rail line that served Bennington County.

This is what the plaque looks like: (I’ve provided a transcription of the plaque under the picture):

Here’s what the plaque says:

HON THOMAS CHITTENDEN,
THE FIRST GOVERNOR OF THIS STATE
LIVED ON THE EXACT SITE OF THIS
BUILDING DURING NINE YEARS OF HIS
OFFICIAL TERM 1778-1787.  THE VIEW
FROM THIS SITE TOWARD THE WEST
WAS ADOPTED AS THE STATE SEAL OF
VERMONT.  NEAR HERE IS THE WELL, STILL
IN USE, DUG BY GENERAL ETHAN ALLEN.
THIS TABLET IS ERECTED BY
WILLIAM C. BROWN, PRESIDENT, NEW
YORK CENTRAL RAIL LINES AS A MEMORIAL
TO HIS GREAT-GREAT GRANDFATHER
PARLEY BROWN WHO WAS KILLED IN
BATTLE AT WHITE PLAINS N.Y OCTOBER
28, 1776, AND TO HIS GREAT-GREAT GRAND-
FATHER LIEUTENANT PHILLIP HENRY PERRY WHO
WAS KILLED WHILE ARRESTING A TORY
NEAR ARLINGTON, AUGUST 1, 1775.

The remarkable thing about this plaque is that it honors two of my 6th great-grandfathers, Parley Brown (1738-1775) and Philip.  Yes, William C. Brown, the man who commissioned and erected this plaque more than 100 years ago, is my distant cousin – probably something like first cousin 5x removed or thereabouts.  Parley’s son Nathaniel would marry Phillip’s daughter Anna in Vermont in 1790.  Their son, my 5th great-grandfather Philip Perry Brown (1790-1876), was born in Vermont before the family moved to New York in the next generation.  I’m descended from Philip Perry Brown’s oldest son Harley Brown (1810-1863) and Cousin William is descended from Philip’s second son Charles E. Brown (1813-1901).  (I do have problems with Harley – he is difficult to pin down. He may or may not actually exist, which renders this analysis moot but still fun.)

Just a note about the “view from this site toward the west” being the basis of the Vermont State Seal.  Here’s the original seal:

This was what the website https://www.netstate.com/states/symb/seals/vt_seal.htm had to say about this seal:

“The design was a circle, bordered on the top and bottom by wavy lines suggesting sky and water. A sheaf of wheat stands in each quadrant of the circle. A cow, of course, stands as a cow does, and Vermont had its share of cows. The rolling hills and forests of Vermont’s landscape are depicted across the center of the circle. A lone pine stands at the top center of the scene. Across the lower half of the circle are the words ‘Vermont Freedom & Unity’.”

I particularly like the phrase “A cow, of course, stands as a cow does, and Vermont had its share of cows.”  I also have questions about whether this was actually the view Governor Chittenden had from his window.

This story is one reason I do this research.  A week ago, I didn’t know much about Vermont and I didn’t know anything about Philip or the story I’ve told in this essay.  Now, I have a whole new outlook on this part of American history (and lots of new Facebook friends in New England who guided my research and tolerated my ignorance).

I am a retired high school history and government teacher. I've been doing genealogy research since I retired in 2012. I define what I do as "constructing a plausible narrative about the past." I don't claim to know everything about the ancestors whose stories I tell, but I try to imagine myself in their lives. I sometimes call it "creative non-fiction." I try to differentiate between what I know for sure and what I "think" I know. View all posts by iseekdeadpeopleblog